Deionized water, also known as demineralised water, is water that has had its mineral ions removed, such as cations like sodium, potassium, calcium, magnesium, iron, and anions such as chloride, nitrate, sulfate, bicarbonate and even silica.
Deionization is a chemical process that uses specially manufactured ion exchange resins which exchange hydrogen ion and hydroxide ion for dissolved minerals, which then recombine to form water. Because the majority of water impurities are dissolved salts, deionization produces a high purity water that is generally similar to distilled water, and this process is quick and without scale buildup.

The implication of PuriTech’s patented innovative ION-IX system, which is based on true countercurrent ion exchange, results in the continuous production of demineralised water, with a conductivity below 1.0 µS/cm².

The distribution valve in  the cation as well as in the anion provide the concatenation of 2 passes through the ion exchange columns. The first pass flows through partially exhausted columns which already have been used in the second pass. The second pass, in turn, flows through freshly regenerated columns coming from the preconditioning zone. This  ensures a very low conductivity with an optimal use of the regenerated resins. The working point almost touches the stoichiometric level which leads to a very low chemical consumption.

The core system is based on a production zone in up flow combined with a preconditioning, a rinse and a regeneration zone in down flow (counter-flow principle). The countercurrent is established by the virtual movement of the columns (red arrows), in the opposite direction than the flow (Bleu arrows). It’s the internal process disk that indexes to obtain the virtual movement of the columns. All columns remain static in the installation.

The feed enters the ION-IX multiport valve which divides the fluid over the first pass through the cation and anion exchanger. As the fluid leaves the first pass, a little part of the partially demineralised water is tapped off for the rinse, while the other part will undergo a second pass through both exchangers before deposition in the product tank. As mentioned before, the second pass (1) flows through a freshly regenerated and rinsed resin coming out of the preconditioning zone. The first pass (2) on the other hand, flows through partially exhausted resins coming from the second pass production zone to make sure that all resins are fully exhausted after the production zone. 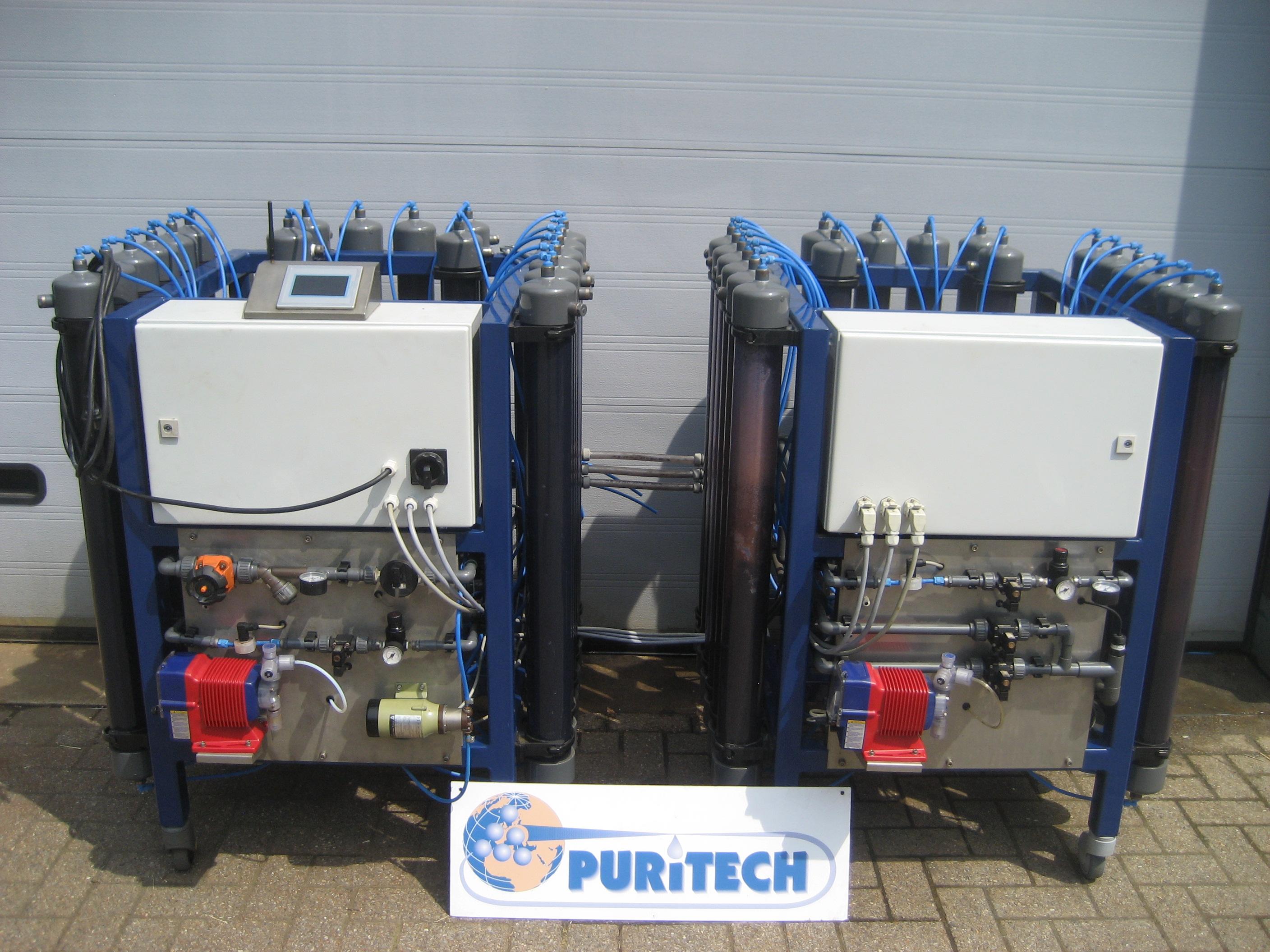 Furthermore, the ION-IX multiport valve indexes to switch from production to regeneration (3) where the columns undergo a recovery step. The cation is regenerated with hydrochloric acid and the anion with sodium hydroxide. The chemicals are dosed 30% concentrated, the dilution takes place internally with the rinse water at the end of the rinse step.
Next, the columns will enter the rinse zone (4) to wash away the chemicals in the columns. A big advantage of Puritech's ION-IX countercurrent system is that the unused chemicals will re-enter the regeneration step. This increases the efficiency drastically.
At last, a preconditioning zone (5) is implicated to remove the remaining ions from the resins. Without preconditioning, the remaining ions can, when entering the production zone, increase the conductivity of the produced water. This way, a maximum exchange capacity is ensured before going to the production zone.
All this results in a continuous countercurrent system whereby a maximum efficiency, a minimum waste and a minimum chemical usage is assured!

Want to get more information?